Wisconsin's Marc Pocan, Georgia's John Lewis, Maryland's Elijah Cummings, Maryland's Jamie Raskin and 40 more have introduced to the House of Representatives a proposed Constitutional Amendment, which states: "Every citizen of the United States, who is of legal voting age, shall have the fundamental right to vote in any public election held in the jurisdiction in which the citizen resides."

GMOM believes that the fight for fair elections - the fight against big money influence and voter suppression - is a fight for the soul of democracy in our nation. We must inspire, organize, and mobilize ourselves and pursue every available path, including the Article V convention.

Despite our record-setting efforts, the Democracy Amendment Resolution (DAR) did not get a vote in the 2017 General Assembly. A national organization is fighting us tooth and nail, and a key Delegate undermined our effort. Nevertheless, we did make progress in having access to and influence with leadership of the respective chambers, and we helped pass three bills on money in politics. Keep reading to get more detail on legislators who provided special support or who opposed the DAR. 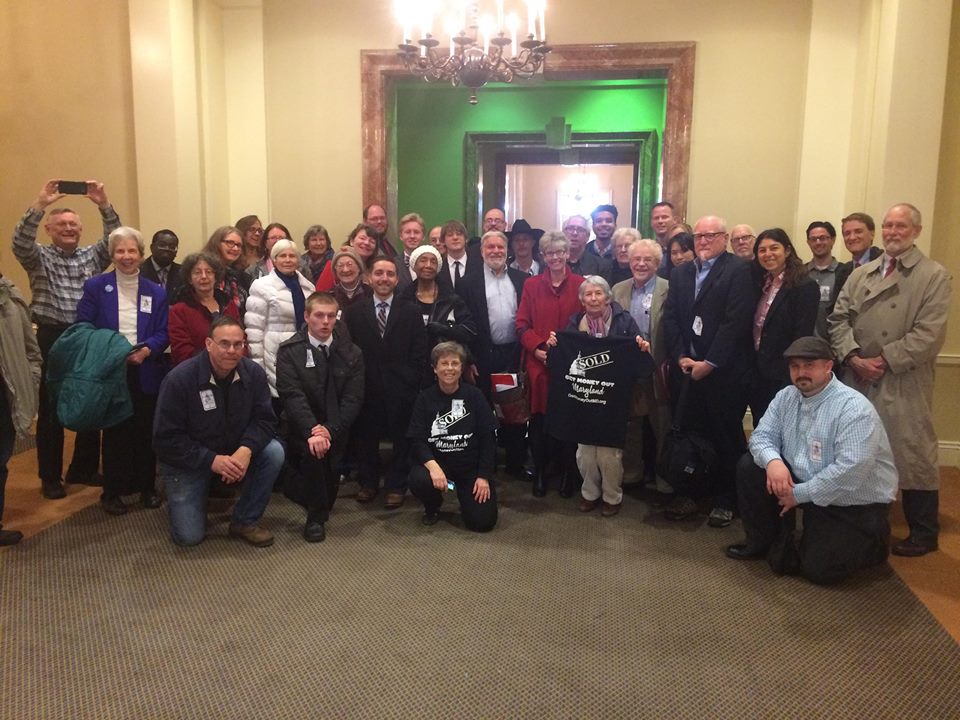 So What the Heck Happened? Why Didn't We Get a Vote on the DAR?

The Senate passed the DAR in 2015, and the Senate President does not want to devote further floor time to the DAR until the House initiates action. Rules Committee Chair Anne Healey did not hold a vote on the DAR. The House version – HJ 6 – did not get a vote because the leadership determined that discussion on the floor regarding the Article V convention process created an unfavorable atmosphere.

Discussion on the House floor over another resolution – HJ 2/SJ 2, which repealed Maryland’s prior applications for an Article V convention - created the unfavorable atmosphere for the DAR. The prior calls were passed between 1939 and 1975.[i] We supported that Resolution because we agree that actions taken between 42 and 78 years ago should not bind Maryland now and that "[t]he need to advance these various policy reforms should be debated anew.”

Unfortunately, Rules Committee Chair Anne Healey urged passage of this Repeal Resolution on the faulty grounds that a convention of the states would be dangerous and could lead to amendments that would damage individual citizens’ protections under the Bill of Rights.

Her speech closely tracked the misleading talking points provided by Common Cause, which has obstructed efforts in many states to achieve the 28th Amendment using the Article V Convention process. Common Cause routinely fails to mention that any amendment proposed by a Convention would have to be ratified by three-fourths of the states - a formidable barrier to the enactment of an unwise amendment. Common Cause also implies that a “Constitutional Convention” could “enact” amendments. In fact, Article V permits “a Convention for proposing Amendments" (emphasis added), not a "Constitutional Convention."

In taking that course, Del. Healey rejected a key element of the U. S. constitution - an element which was provided to protect citizens from an unresponsive or corrupt Congress. Del. Healey chooses to avoid directly confronting the forces supporting big money in politics on the basis that we should be afraid of them. District 16 Delegate Bill Frick, House Majority Leader, shares many of these views. You can listen to Del. Healey and her exchange with other delegates here. And you can hear GMOM volunteer Susan Ogden refute her points here.

District 27 Senator Mike Miller, President of the Senate, expressed his support for the DAR. Please send him a thank-you message by e-mailing him at [email protected] or by calling his office in Clinton at 301-868-6931.

District 28 Senator Thomas Middleton has been extremely helpful to us in winning support within the Senate leadership.

District 30A Delegate Mike Busch, Speaker of the House, did not support the DAR this year, and there was no vote on it in the House Rules Committee. He did invite us to meet with him again. We continue to believe that if he makes his support known during the 2018 session, the Rules Committee will be inclined to issue a favorable report.

Common Cause's only strategy for winning an Amendment is to persuade Congress to propose it. We believe - and our supporters in the Congress confirm - that no progress will be made toward the 28th Amendment using a Congress-only path for the foreseeable future. In addition, the appointment of Justice Gorsuch means that the Supreme Court will not be overruling itself any time soon on campaign finance matters.

Get Money Out believes strongly in pursuing both paths laid out in Article V of the Constitution to build support for the 28th Amendment. To do otherwise is to ask citizens to fight voter suppression and big money in politics with one hand tied behind our backs. Click here for our full explanation of why we reject the “runaway convention” theory and other fear-based opposition to the full use of Article V.

[i] “These calls include: (1) House Resolution (1939) (unconfirmed) calling for limitations on the federal taxing power; (2) House Joint Resolution 40 (1964) calling for standards concerning the size and boundaries of congressional districts; (3) Senate Joint Resolution 1 (1965) calling for legislative autonomy concerning the apportionment of State legislative bodies; (4) Senate Resolution 47 (1973) (unconfirmed), a memorial from the Senate of Maryland calling for the allowance of school prayer in public schools; and (5) Senate Joint Resolution 4 (1975) calling for a balanced federal budget. It is generally believed that these calls never expire, and current generations are now bound by decisions made in a different time and culture. The need to advance these various policy reforms should be debated anew, and not bind future generations without any consideration. . . .”