Article V of the U.S. Constitution
and the Amendments Convention

The framers took special care to ensure that no branch of government could ever attain unchecked power. They anticipated and prepared for the possibility that Congress might go off course and need correction by the people themselves. For that, they gave us Article V, which gives the people the right, through their state legislatures, to call for an Article V Convention (or, "Convention of the states") to propose amendments to the constitution. Article V is a core component of the constitution, meant to be used when our federal legislators no longer represent us, and that time is now. 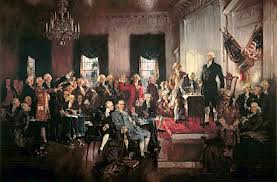 The Congress, whenever two thirds of both Houses shall deem it necessary, shall propose Amendments to this Constitution, or, on the Application of the Legislatures of two thirds of the several States, shall call a Convention for proposing Amendments, which, in either Case, shall be valid to all Intents and Purposes, as Part of this Constitution, when ratified by the Legislatures of three fourths of the several States, or by Conventions in three fourths thereof, as the one or the other Mode of Ratification may be proposed by the Congress....

Thus there are only two ways to amend our Constitution:

Does the Constitution belong to Congress or the people?

The selling point that made ratification of our Constitution possible in 1791 was the promise that States would have ultimate authority over Congress in proposing and ratifying amendments. This "federalist" principle has broad appeal from right to left for: conservatives, tea partiers, libertarians, moderates, independents, liberals and progressives. Only by working across the political spectrum can We the People hope to win against wealthy entrenched special interests and enormously powerful corporations.
-

The Article V Convention process has been used often

Just the threat of an Article V Convention may be the most effective way to motivate Congress to directly propose meaningful amendments. Four times in history, Congress has proposed amendments (which were later ratified) only after state legislatures voted for an Article V Convention for each of these issues. In order to forestall a Convention, Congress then proposed these amendments directly. Ten amendments (now known as the Bill of Rights) were adopted in 1789 after New York and Virginia applied for a convention to draft a Bill of Rights. We won the 17th Amendment (for direct election of Senators) in 1913 when states were very close to the two-thirds needed to call for a Convention. Also, Congress proposed the 21st amendment (repeal of prohibition) and the 22nd amendment (term limits for the President) after several state legislatures had called for an Article V Convention for each of those issues.

Why no worries about a "Runaway Convention"

Some worry about a so-called "runaway convention" that might propose a wild, irresponsible amendment. First, an Article V Convention would have no more power to propose amendments than Congress already has. The requirement for ratification by three fourths of the states would clearly prevent any "runaway" amendments from being proposed or ratified. This has never been a problem in the hundreds of state constitutional conventions, to develop state constitutions, that have already been held in the U.S.  It is possible to limit the convention to the issue of overturning Citizens United and corporate personhood.  It is sometimes incorrectly referred to as a "Constitutional Convention," but actually it is an "Article V Convention"  or "Convention of the states" who's purpose is limited to proposing amendments on a specific topic  (as specified by the states).

10 Facts to Rebut the Myth
of a Runaway Convention

Learn more and get involved.