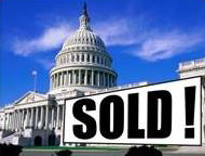 "I think a lot of people would be surprised to find out that members of Congress are expected to pay their party for their committee assignments. And this is like $200,000, $500,00 every election cycle just to get a certain committee seat. Now where are you going to get that money? You’re not gonna go back home and have a fundraiser in somebody's living room. That just doesn't work. The people that fund your purchase of the committee seat are the people who have an interest in the work product of that committee, i.e. the lobbyists."*
—U.S. Representative Thomas Massie (R-KY)

"If you're angry and passionate about the fact that we can't get the most basic common-sense, gun-safety measures in place, then be angry about the fact that the gun lobby and the NRA have been spending millions of dollars up here to advance their agenda. That's just connecting the dots. [If] you care about tax policy, healthcare, the environment, you gotta care about where the money is coming from."*
—U.S. Representative John Sarbanes (D-MD)

Big Money in our elections distorts our democracy in two important ways: It influences which candidates are serious contenders in our elections. And it determines which legislation our elected officials vote for and pass. The vast majority of Americans agree this is a real problem.

Candidates We Vote For

Because Big Money determines whose messages we read, see, and hear during campaigns, it guarantees which candidates' messages are most widely distributed, and as a result, which candidates gain the lead. We are unlikely to know where the messages come from, in other words, who is paying for them. This "Dark Money" impacts all our elections—local, state, and federal. Typically, we are unaware of its influence. The process is especially effective at ensuring that only pro-business candidates advance to the general election.

Big Money in politics affects which laws are passed by local, state and federal governments. It is the main goal and achievement of Big Money interests.

When our elected representatives are financially dependent on outside entities for reelection, it should come as no surprise that their votes on legislation are tied to donors' demands. Some lobbyists even write the donor-friendly language in bills, which some of our representatives then introduce without, in some cases, bothering to read it.

It may be hard to believe, but 446 retired members of Congress now have lucrative lobbying, or "senior advisory" jobs. Because of this revolving door, current incumbents often find their personal interests linked to those of corporations, especially if they look forward to cashing in after they retire or are defeated. The level of corruption today mirrors that of the robber-baron Gilded Age, which sparked the 17th Amendment to the Constitution—the one that mandated direct election of U.S. Senators.

Americans Agree: It's a Problem 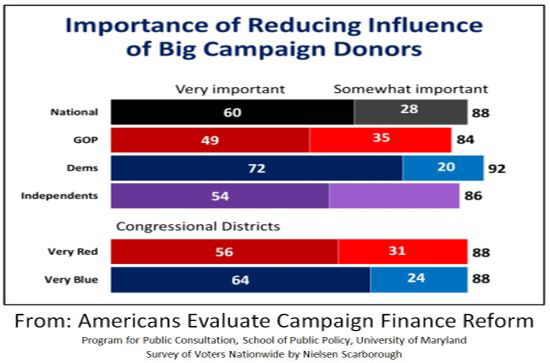