We must pass the For the People Act! 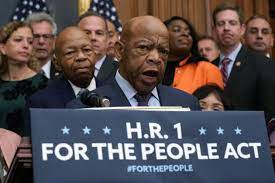 The For the People Act (H.R.1), sponsored by Maryland's John Sarbanes, has passed the House of Representatives. If enacted, it will be a great step forward to strengthen U.S. democracy. The bill contains critical provisions:

Here is a more detailed Fact Sheet from Rep. John Sarbanes, the prime sponsor of H.R.1. (It's S.1 in the Senate.)

The For the People Act faces a steep challenge in the Senate, though, because Republican senators are united in opposition – even though many Republican voters are supportive of the provisions in the bill. The rules of the Senate would need to change to allow the bill to pass with a simple majority. We must do everything we can to make sure that our Maryland U.S. senators Chris Van Hollen and Ben Cardin fight hard to promote the necessary rule changes and to keep sufficient unity to win. We have founded the For the People – Maryland coalition, and it is growing quickly.

Call or email your U.S. Senators

Big-money interests are driving opposition calls into our Senators' offices. If we want democracy reform, we must call these offices, and say: "I ask that you work actively in the caucus to amend the rules to pass the For the People Act."