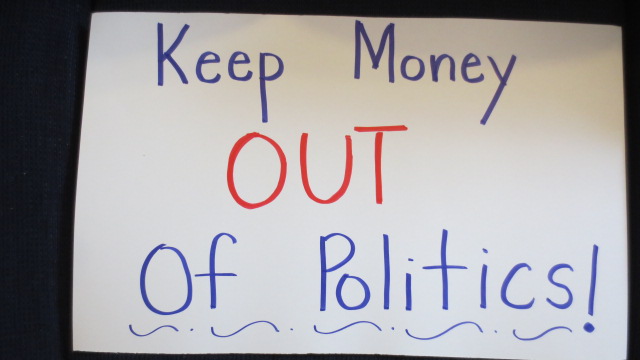 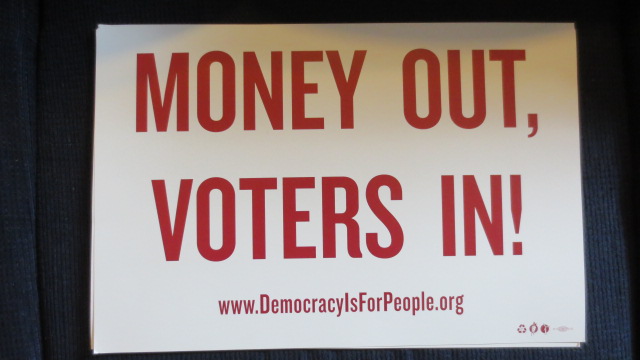 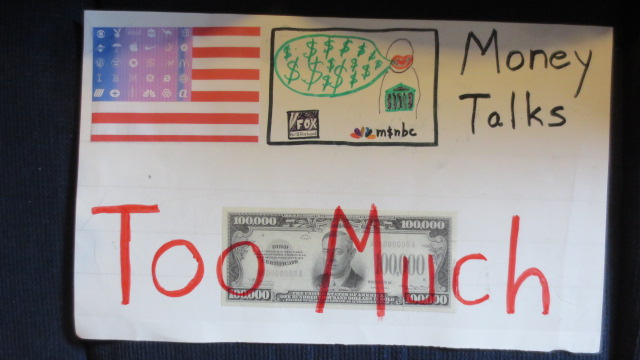 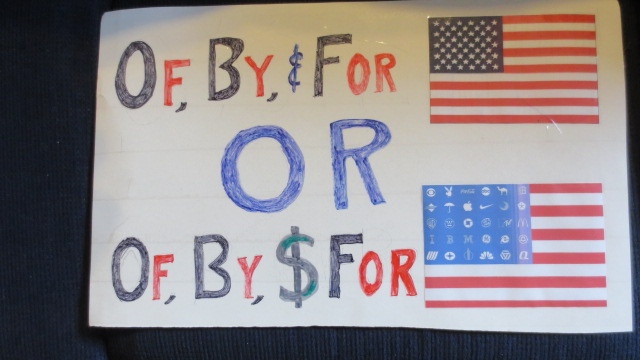 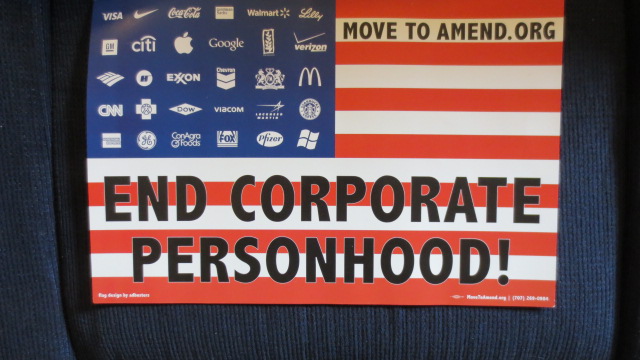 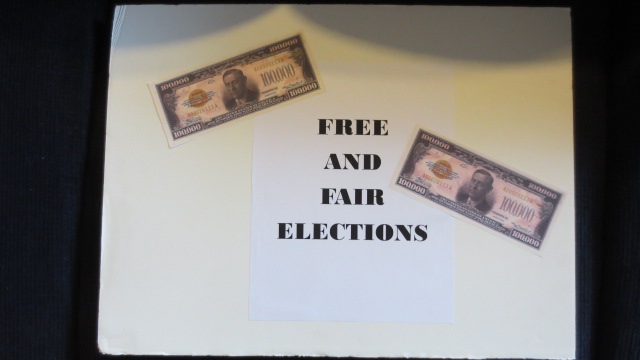 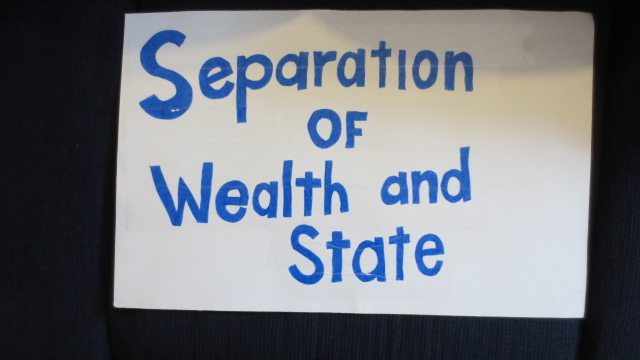 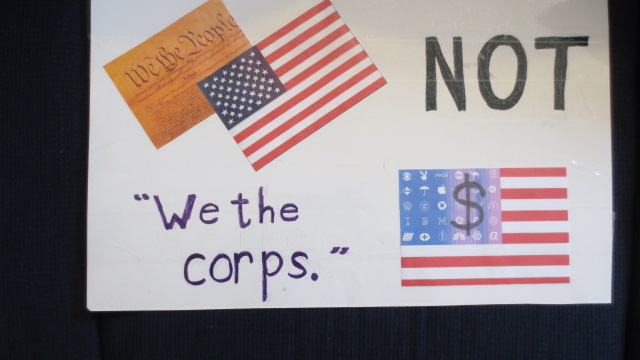 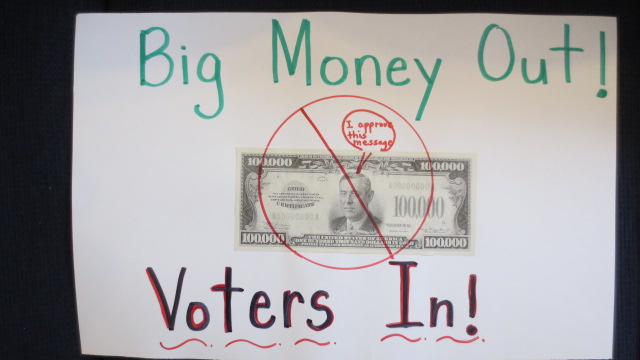 The Other Best collection of Democracy Artwork We've Seen

HOW TO MAKE SIGNS

Wearable Slogans for use with a Corporation / Billionaire Outfit:

Wearable Slogans for use with a Politician's Outfit: 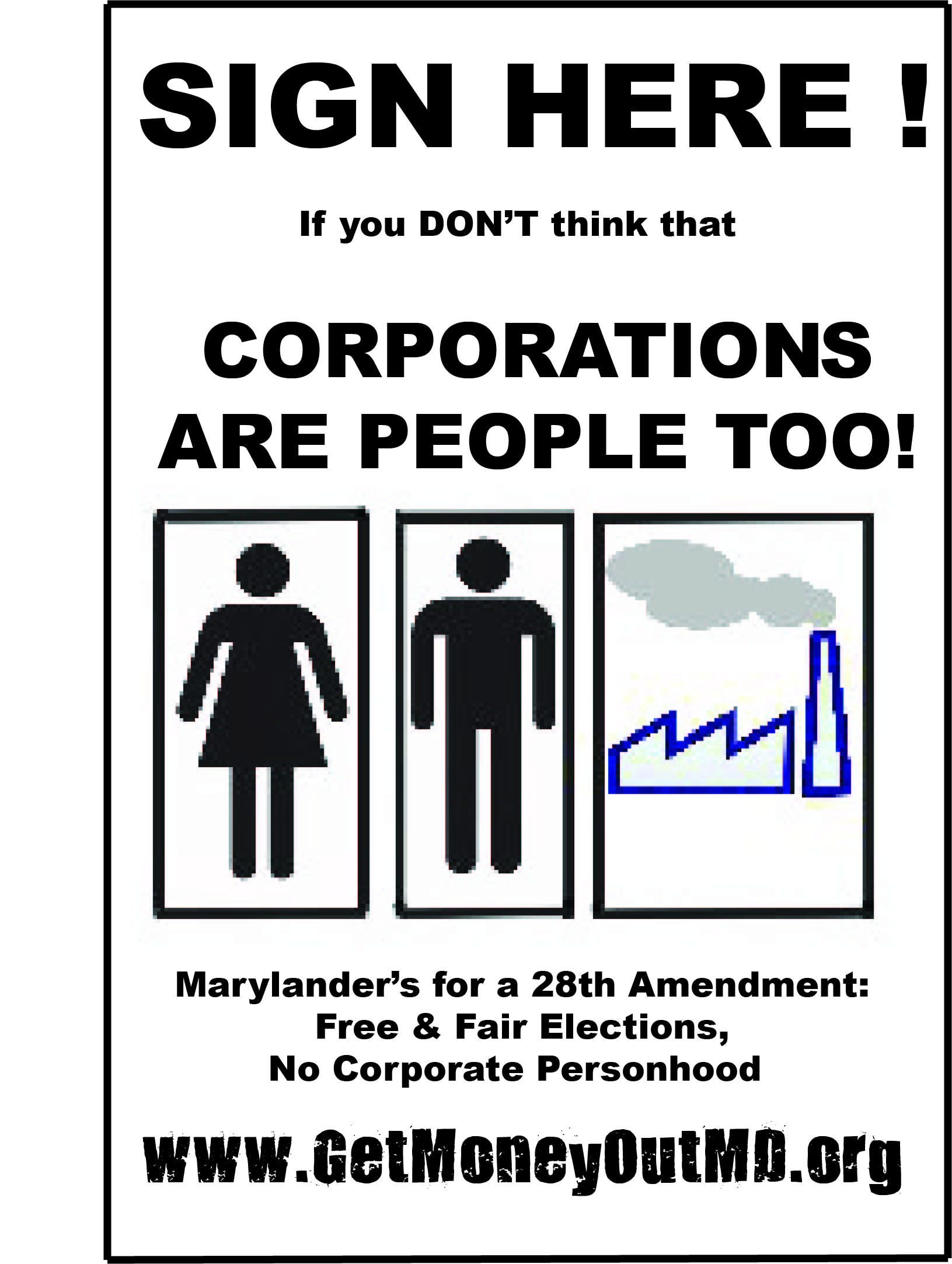 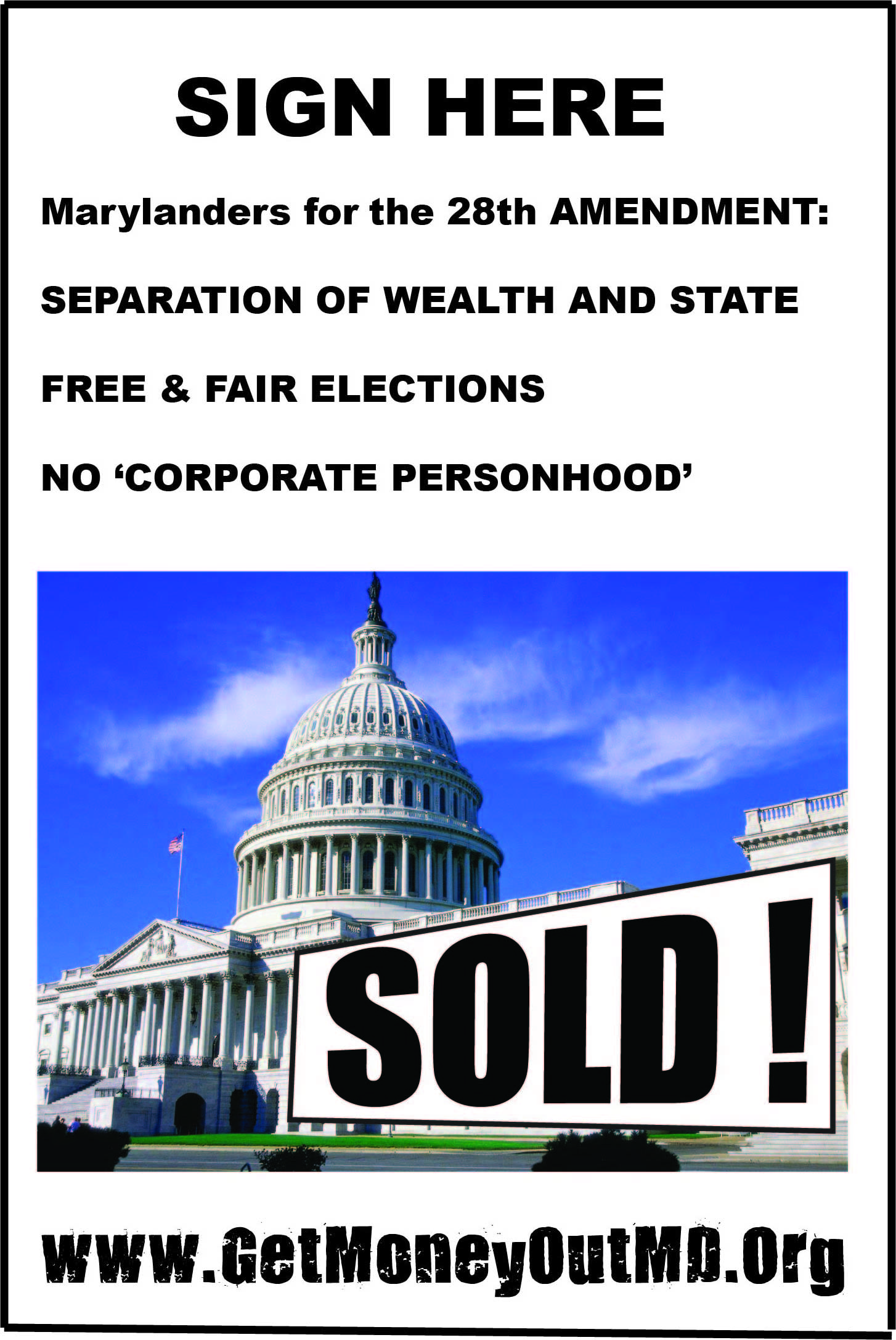 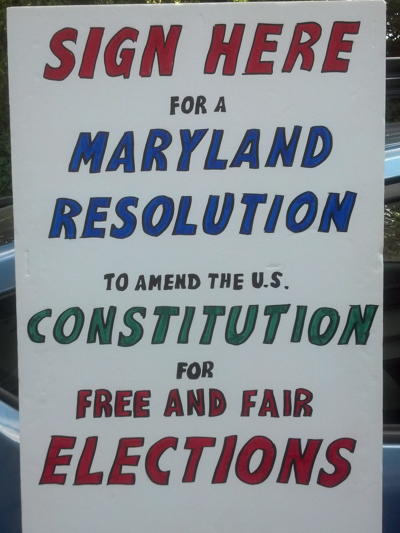 “Corporations Are People Too!”

Corruption:   It's our American System of Government

Now EVERYONE, from Goldman Sachs to your grandmother, has the same right ...
... to spend millions of dollars on elections.

I believe in the separation of corporation and state

Let's get Corporations and wealthy people to pay for all our political campaigns!

DEMOCRACY:  It was fun while it lasted.

Hey Government:   HANDS OFF OUR CORPORATIONS!

Thank a Corporation:  They pay for Your Elections.

Preserve the American system of Democracy:   Let Corporations pay for EVERYTHING.

Corporations can spend as much as they want on elections. Is this a great country, or what?

What do you call election funded by anonymous corporations with business before Congress? 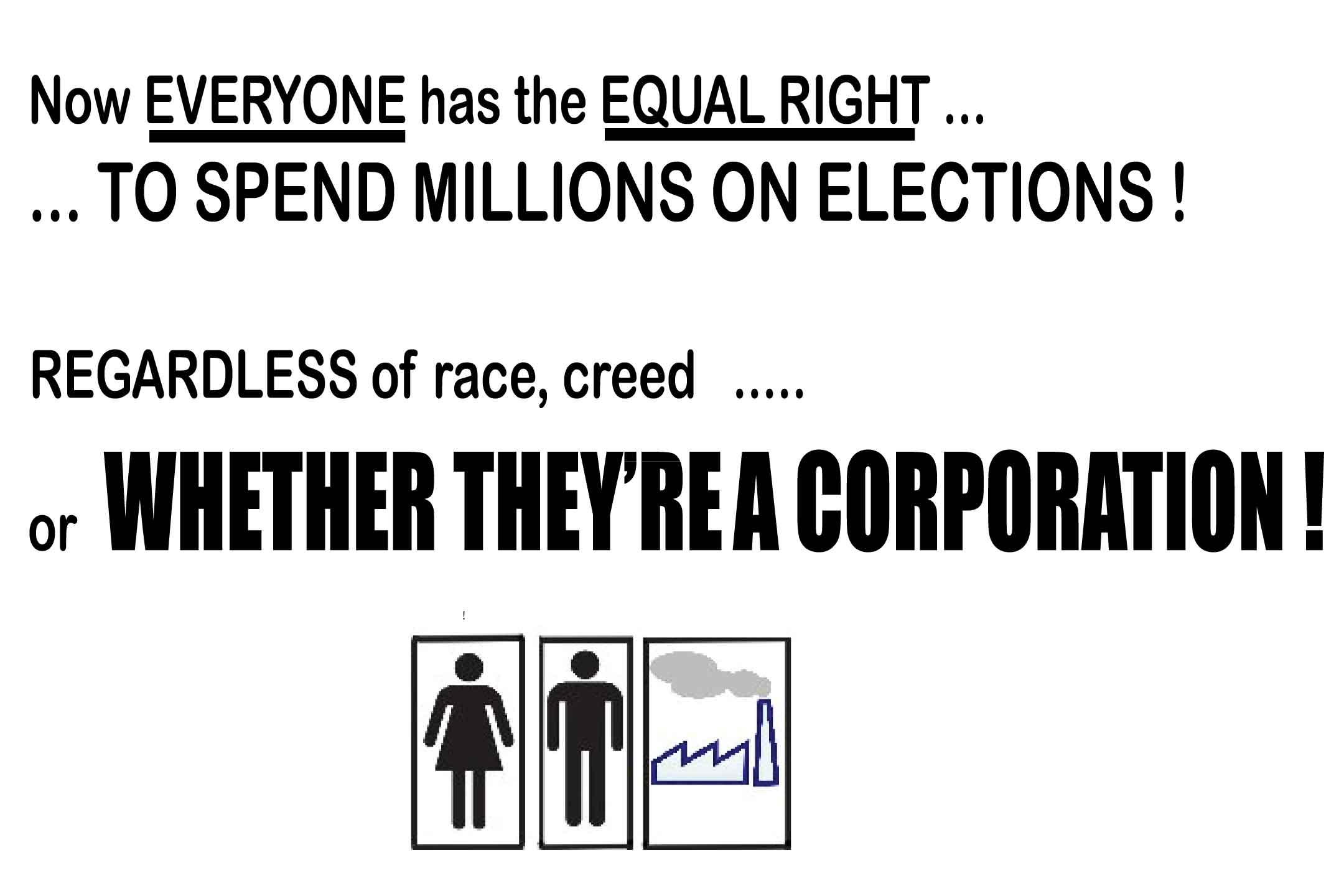 A:  Corruption
B.  The American System of Government

Corporations shouldn't be in charge of Elections for actual humans.

The greatest, most expensive election in history,  brought to you by Raytheon, the Altria Group, J P Morgan Chase, & Goldman Sachs.

OTHER SLOGANS/POSTERS:
Corporations Should Not Be In Chargeof the Elections of Actual Humans

U.S. legislators raise most of their election funds from businesses they regulate.
You got a problem with that?

'We the People' Not 'We the Corporations'

What Part of “We the PEOPLE” don’t you understand?

The term “Corporation” does not appear in the constitution.

Any legislator foolish enough to stand up to corporate interests can expect an extremely well-financed challenger in the next election.

Why do legislators do whatever Goldman Sachs, Exxon, Monsanto, and United Health Care want them to do? Oh yeah, they pay for elections.

Corporate-Funded Elections are not Healthy for Children & Other Living Things

Cut the bull and cut the jive
Corporations are not alive.

Cut the jive and cut the bull.
Corporations are not people.

Who does Congress Represent?
Let’s Get in the Big Tent:
The 28th Amendment!

Amendment 28 is gonna set us straight!

Time for some disruption of political corruption

Paper Model of the Capitol Building (from www.PaperModelsInc.com) 16," and smaller sizes,  worn on head or carried, with a "Sold" sign on it.

Large Ballot box with large 1,000 bill in the slot.

"The problem with the corporation as a person is that it has no soul to save and no body to incarcerate." Edward Thurlow (19th century)

"If there is no struggle there is no progress.   Those who profess to favor freedom yet deprecate agitation want crops without plowing."
- Frederick Douglass 1857, native of Maryland

"Today, the voices of average Americans are being drowned out by lobbyists and special interests.  But you can do something about it!" -  actual ad for the Americans for Prosperity/Tea Party summit: 'Defending the American Dream,' Austin TX, July 2010, fundedby oil billionaires Charles & David Koch).

QUESTION:   Mr. Legislator, are your decisions influenced in any way by the fact that most election spending is by anonymous huge corporations?  ANSWER:  No.

QUESTION:  Mr. Legislator, when you accept large amounts of money from huge corporations, or when it is spent on your behalf in an election, does that create the appearance of corruption? ANSWER:   No.

QUESTION:   Mr. Corporate representative, why does your company give large amounts of money to both Democrats and Republicans in the same election?   ANSWER:   Because we believe in Good Government.

QUESTION:  Mr. Corporate representative, will your company agree to stop anonymous funding of elections?  ANSWER:   That's a good question.  Let me think about that . . . ummmmmmm, No.

Actor 1: Dress up as corporation or billionaire
Actor 2: Dress up as politician.  Accept large sack of money from Actor 1.    See above for wearable slogans above, like "Grateful" politician, "Generous" corporations, etc.

Ordinary person tries to place an over-sized ballot into the ballot box, but is prevented by a billionaire or corporation, who then stuffs giant bills into the voting box, lights cigars, chants & wears funny slogans (above).